Showing posts from April, 2018
Show all

McDonald's packaging has the phrase: "Please don't litter" printed on it... Makes perfect sense! In today's society, you don't go grab a cheap cheeseburger, devour it, then throw the waxed paper wrapped on the ground when you're done with it. Yes, we live in a disposable culture, but we're not savages... So why then, does the McDonald's corporation feel it's okay to just leave their garbage all over the landscape once they are done with it? (Not that I'm complaining, they're just giving me stuff to take pictures off as I drive around town!) Almost 20 years ago, I took a job at Wadsworth and 20th Avenue, in Lakewood, CO. Every morning, I'd wake up early, and drive in obnoxious traffic for nothing pay and crappy bosses. Just like everybody on the planet does... That only lasted from July 1999 though September 1999. I was so uncertain of that job as it was going, that I never left the other one I was working at the t
Post a Comment
Read some more » 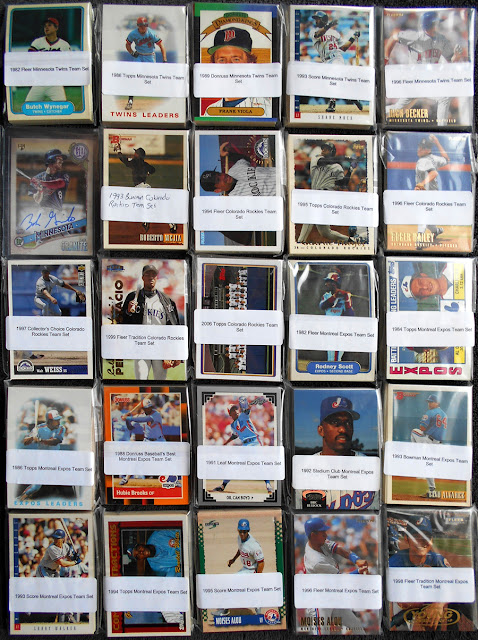 The other night, boredom met impulse and I jumped on ebay. I know better than to do this, but occasionally the urge hits and I have to log on. Usually I'll search for a couple of things, answer some subliminal questions that never needed answers until RIGHT NOW , then go on with my day. As with most nights when the ebay urge kicks in, I'll turn it off and get away quickly. No cost incurred. That night I'm talking about didn't end up that way... Wormhole in the form of looking at gaps in my Expos, Twins and Rockies team collections brought me to look for inexpensive team lots. When nothing of interest came up, I switched over to looking for team sets. My weakness... I can wipe out and entire team set in one fell swoop instead of looking for the additional 15-20 singles that I may need... I'm not going to reveal the seller, but I found someone who added magic words to his ebay store: "First item ships for $2.75. Each additional item is no charge for shipp
Post a Comment
Read some more »
More posts