Showing posts from August, 2017
Show all

There’s nothing notable about this recently closed gas station, at Evans and Milwaukee. Never once patronized the place in all my years of driving by. My memories of the station were limited to noticing how busy it always was when I drove past. In early April of this year, a routine drive by revealed that it was now fenced off from the public. That means it will be gone soon... That means I need to get over there and photograph the property before it becomes condo-licious... Upon finishing my work week, in the early morning of April 30, 2017, I was going to get pictures of this place before moving on to other usual targets. The night before my planned photo tour, the Denver Metro got a coating of snow. Most of it had melted away by morning, but there was still some left by picture time. I went back two months later for dry ground pictures. But I ended up liking the snow pictures more... The color and clarity was better in that light. Overcast days are so much better
Post a Comment
Read some more »

Beyond Shinders and 2008 Upper Deck Spectrum

Shinders was an iconic newsstand in downtown Minneapolis, that dated back to the early 1900's. It had evolved from a newsstand, into a franchise that sold thousands of different magazine titles, new and vintage sports cards and memorabilia, collectable toys, books and other weird stuff, into the early 2000's. I spent hundred of hours and thousands of dollars at Shinders during my lifetime. The store above was located in Roseville, MN, and was still open in June, 2007, when this photo was taken. Shortly after this, a scandal of guns, theft and crystal meth, caused Shinders to close all 13 stores for good by August 2007. But I'm not telling that story today! We're going Beyond Shinders... After the initial chain closed up shop, two former Shinders employees decided to resurrect the name and open a new store, focused on selling the same merchandise, filling the gap that Shinders closure brought on. And this new store would be caled... Beyond Shinders! (Not go
Post a Comment
Read some more » 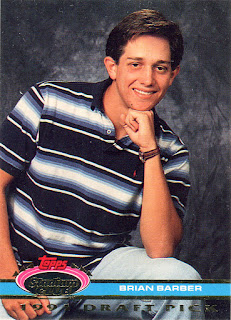 The 1991 draft class was the first I followed very closely. At the time, it seemed to me like every first round pick would translate into a lengthy All-Star career. Being only a few years in to the card collecting game, I lacked perspective. Every 18 year old kid that starts off strong in Rookie League will not go on to a 20 year career, ending with a Hall of Fame induction. But that's where the fun came in... If I didn't agree that the Atlanta Braves made a mistake in taking Chipper Jones instead of Todd VanPoppel, in the 1990 Draft, I wouldn't have learned such a valuable lesson from it... However, THIS GUY is a can't miss pitching prospect! You can tell by his shirt! During his senior year at Dr. Phillips High School in Orlando, Florida, Brian Barber set a team record of 11-0 (with 8 complete games) that still stands today. He was named State, Regional and National Gatorade Player of the Year in 1991. To this day, he is still the only player to ever
2 comments
Read some more »
More posts