Abandoned gas station, about 10 miles east of Mancos, Colorado.
Here's a list of links to my stories of abandoned buildings and stuff in Colorado.
Denver

A Leisurely Walk Around Capitol Hill - Colfax and Logan (and vicinity)

Someone else liked these... 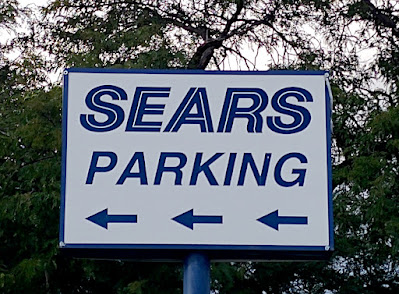 This way to Sears! Oh yeah, that's right...  The St. Paul, MN, Sears department store closed their historic Rice Street location, at 6 p.m. Sunday, January 6, 2019. Well, 6 p.m. was the plan, but the store actually closed at noon that day.  When it closed, that left only two remaining Sears locations in Minnesota (and zero Kmarts). The last two Sears locations were at Ridgedale Center in Minnetonka, and the Mall of America. Which shouldn't be allowed to exist. Both of those Sears stores would close by the end of March, 2019.  But for now, I'm only concerning myself with the former Sears store at 425 Rice St., in St. Paul, MN. Built by architect Victor Gruen (reputed as the "father of the American shopping mall"), and opened in 1963, the St. Paul Sears was known for its modernist design, which looks very dated today. It also looks very similar to the still standing and still vacant Sears store at the Brookdale Mall . Which I wrote about several years ago, and it
Read some more » 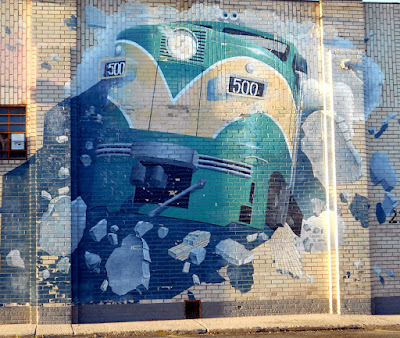 Once again, just looking for a quick story to write, turned into a much bigger project that I didn't see coming. As I was writing the last story ( 2021 Topps Silver Pack Top Whatever ), Caboose Hobbies burst into my head... That awesome train mural is long gone.  The building that once housed Caboose Hobbies was demolished in 2017. Which was supposed to be the story I was going to write. I took a bunch of pictures before it was gone, and this seemed like a good time to show them off. But as it always goes, I start working on a new idea, and that spawns off other ideas that fit the theme. Suddenly, I'm thousands of additional words in. This story ended up touching a few more nerves than I'd expected when I planned it out. March 22, 2015. Here's one of the two pictures I have of Caboose Hobbies, while it was still open. Located at 500 South Broadway, I'd driven past the building hundreds of times between 1996 and 2018. I loved that train crashing through the north wal
Read some more » 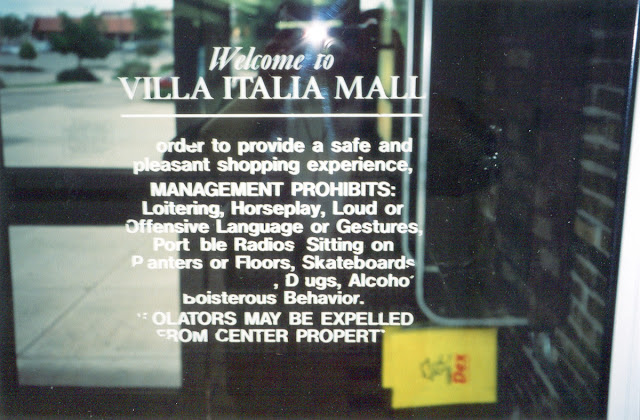 Villa Italia Mall in Lakewood, Colorado, opened in March 1967.  It closed for good on July 15th, 2001. I'm not going to get into the biography of the large shopping mall. My experiences there number a grand total of two. Once in June of 2000 (for a baseball card show), and the other in May, 2001, when I took these pictures. Since there was no emotional attachment on my behalf toward the place, I know next to nothing about it. There are a few good sites with real information and more pictures of Villa Italia. Both in it's heyday and in it's depressed run down state. I consulted these for this story. Deadmalls has a basic biography, that is a good starting point.  A link appears at the bottom of the page that takes you to another site with a nice selection of Villa Italia photos. Or you can just click here... So let me add my piece to that total! In May 2001, my mom was in town from Minnesota. She was in Denver visiting my sister (who lived in Lakewood)
Read some more »

What Happened to Clark's Submarine Sandwich? 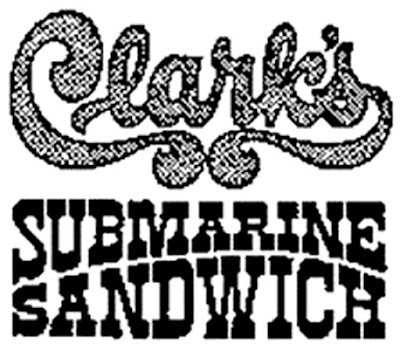 Well, they went out of business! Yeah, that's the short answer.  But more importantly, what happened to each individual Clark's Submarine Sandwich store? Once there were 15 of them scattered around the Minneapolis/St. Paul metro area, but they were all gone by 1991. Clark's still has a small but loyal following around town, and a reputation built off the bread, thinly sliced onions and most important, the sandwich oil that was it's signature. While the chain is long gone, I want to know just how gone is it?  For example, my hometown had a Clark's Submarine Sandwiches, and that building is still standing. Former Clark's Submarine Sandwich Location: 401 Northdale Blvd. Coon Rapids Back in October 2006, the building had long been sitting empty, but was still in good shape. Shortly after I took the picture of the abandoned Clarks/Cousins building, it was renovated and turned into a Dunn Bros. Coffee. But still standing! Clark&
Read some more » 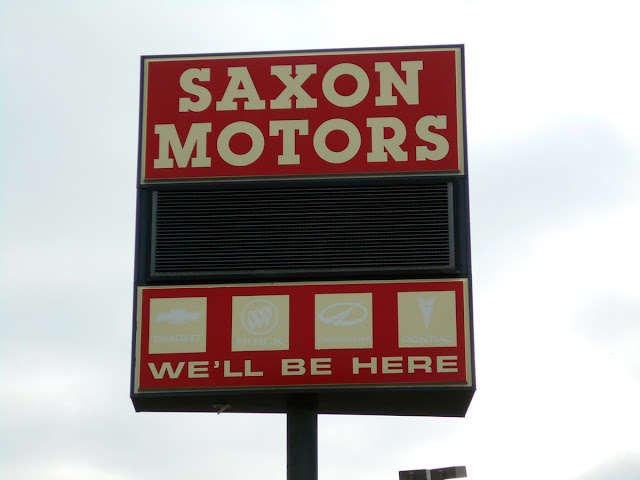 Hey Saxon...  No... You weren't! Wait, it was Sunday...  Blue laws... My bad... I was in Minnesota for a little over a week in November last year. One of the days I was free, my friend Trav asked what I wanted to do... "Take me to something abandoned!" He suggested a drive out highway 10, west to Elk River, for Saxon Motors. A large automobile dealer, located roughly at the junction of highways 10 and 169. On the way, there were several abandoned gas stations worth stopping and checking out, as we forged our path to Saxon... Once we got on the frontage road leading to Saxon, we found that access was blocked by this impenetrable gate... We would need to find another way onto the property... Driving around to the far corner of the parking lot, past the ironic Saxon Motors sign... Which has some strange sort of optical illusion going on with how the bottom is angled.  I haven't quite figured out what they were going for
Read some more » 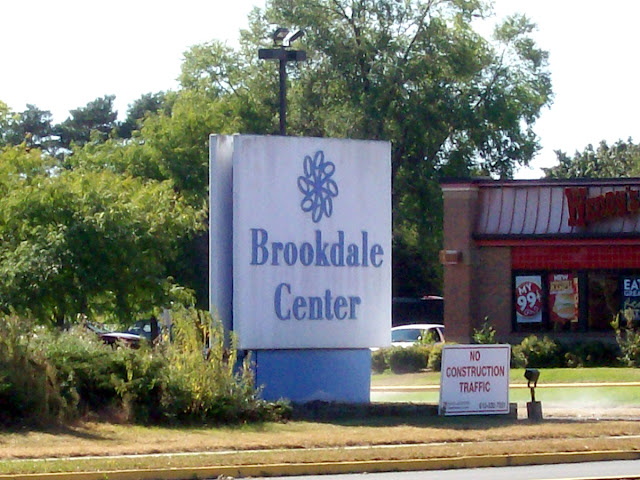 Visiting Minnesota in September 2011, my dad told me that Brookdale Shopping Mall was being demolished, and we should check it out. Brookdale opened in 1962, as one of the "Dales." A series of suburban metro area shopping malls designed to syphon retail dollars away from the traditional downtowns of major cities. In the Minneapolis/St. Paul metropolitan area, Brookdale was in Brooklyn Center, Rosedale was in Roseville, Ridgedale in Minnetonka and Southdale in Edina. Back in the day, needed housewares, "important" clothes for school and other reasons, and whatever other supplies the family had to buy, usually came from the mall. Brookdale was a constant. Rosedale as well, but that mall is currently thriving today, and thus far off my radar. Northtown mall was the closest to us, but it was a second tier mall without the top drawing anchors. Northtown has seen a little hint of a resurgence after losing it's long string of anchors and a series of renovati
Read some more » 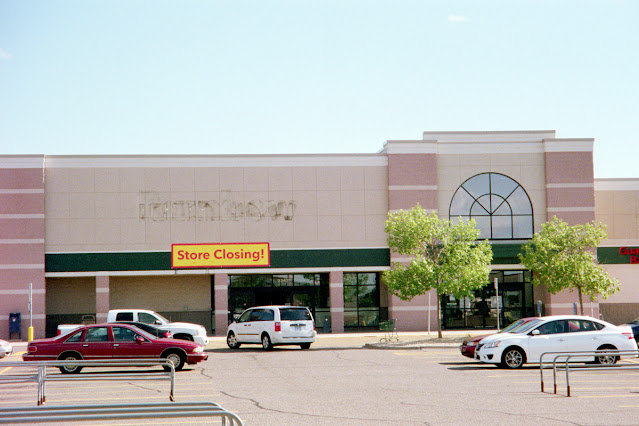 Recently there’s been a lot of chatter amongst the townsfolk about the retail abomination known as Riverdale. Another round of store closures has people talking about what a massive failure this shopping cluster has always been, and why retail is the way it is, and who's to blame and all that kind of stuff. Bottom line being, more stores that people liked shopping at are gone. For whatever reason. Which made me wonder, how many former businesses in Riverdale did I manage to get pictures of over the years? As I started going through the Riverdale picture folder on my external drive, I found far more than I'd expected. This is by no means EVERY former business that didn't survive the ridiculous conditions of shopping in my hometown, but it's an interesting peek into some of what didn't work. I didn't live in Coon Rapids when Riverdale was built. When I moved back in 2003, I was horrified that the western sky now had a brilliant orange glow in the middle of the nig
Read some more » 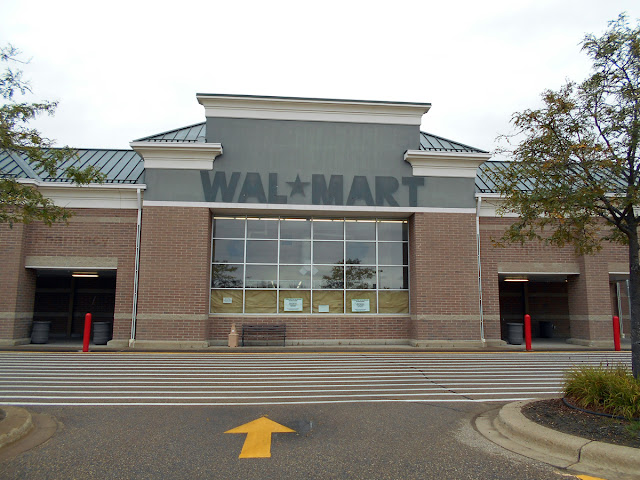 Check out that sweet label scar!  WalMart closed their St. Anthony store on April 8, 2014. Hours later, the new WalMart Superstore in Roseville, less than three miles to the southeast, held their grand opening. WalMart decided they could get a much better deal from the City of Roseville. Less than a decade after opening the St. Anthony location, WalMart left a big empty building for the city to deal with. Breaking a 20 year lease in the process. For what it's worth, this is one of the nicer looking abandoned WalMarts I've seen in person. Originally signed on to anchor the south end of the new Silver Lake Village shopping complex. Which was to be built on the land previously occupied by the Apache Plaza shopping mall (1961-2004). This store opened in 2005, and did good numbers during it's life. Providing easily accessed wares to all the nearby residential neighborhoods, both old and new.  But it's location was also it's undoing... Silver Lake Village is anchored on t
Read some more » 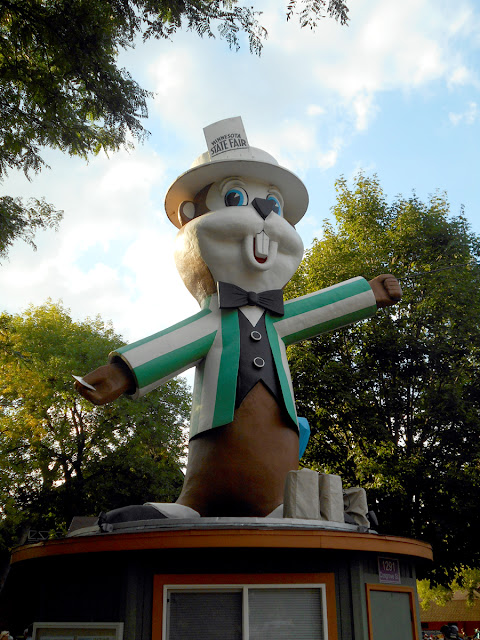 Now that I'm back living in Minnesota, I was looking forward to seeing the Minnesota State Fair again. Why you might ask? After all, such an event would seemingly contradict everything I endorse. I hate large crowds, I hate being outside, I hate commerce, I hate the public... Yeah well, when it's all thrown together into one gigantic spectacle, you almost have to experience it in person. You simply can't get better people watching anywhere else! And that is something I oddly enjoy... Once a year at most...  There's a line in Kevin Smith's first movie (Clerks) that resonates with my opinions on the subject... Dante: "You hate people!" Randall: "But I love gatherings... Isn't it ironic?" Well, I kinda do... Attending the fair has been something I typically did every Summer that I lived in Minnesota, and missed it during all the years that I didn't, the 2018 fair was a must on my to do list. Research purposes!
Read some more » 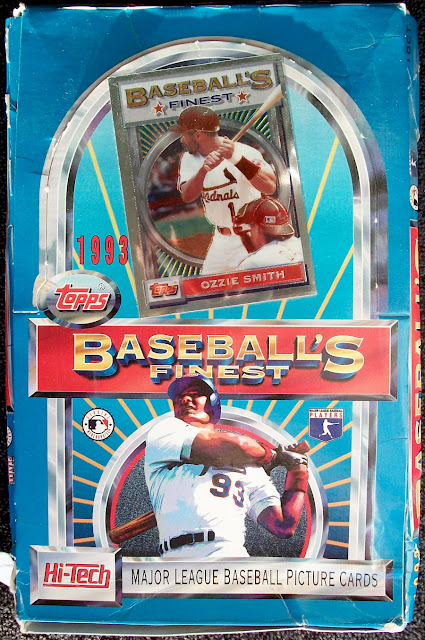 When 1993 Topps Finest first hit the Hobby Shops, I missed the whole 5 minute window where it was still affordable. Topps debut the product as the first baseball card release at the $5/pack level. 1993 was deep into the Junk Wax Era, and it was questionable weather the hobby would support such a product. As The Becketts were showing even at that time, card prices were falling for the once hot sets of recent years. 1989 Upper Deck, 1990 Leaf, 1991 Stadium Club, 1992 Bowman... All releases that were red hot in the market had cooled significantly. Product was still over saturating the market. There was simply still too much of everything, if you were looking for stuff to hold a decent resale value. In a bold move for the day, Topps severely cut the production on 1993 Topps Finest Baseball to an unheard of 4000 cases. 12 boxes in each case. 18 packs in each box. 6 cards in each pack.  Topps did create scarcity.  Quickly. 1993 Topps Finest was THE topic of conversatio
Read some more »